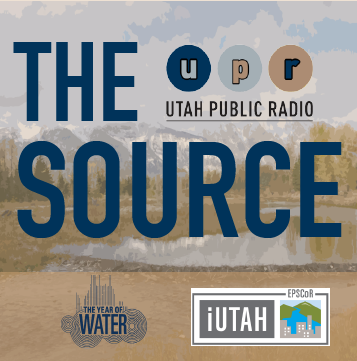 The Source, an hour-long monthly program produced by Utah Public Radio (UPR), has tracked water news across Utah during Utah State University’s Year of Water in 2015. Monthly editions by reporter Jennifer Pemberton and her team have followed scientists, and others, into the lakes, streams, and snowfields that are the source of our drinking water, our agricultural industry, our stunning scenery, and our world-class recreation. The award-winning program was recognized with awards from the Associated Press Radio-Television Association (APTRA), and the Society of Professional Journalists, Utah Headliners Chapter in 2016.

The Source on UPR was made possible with support from iUTAH. 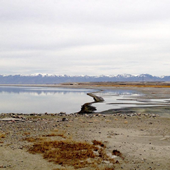 The Source: the Year of Water in Review

By JENNIFER PEMBERTON • JAN 28, 2016 • Listen Time 54:10
In this final episode of The Source, a look back at 2015 -- the Year of Water. There was a lot of water news to follow from the drought to deadly flash floods in Hilldale to the toxic sludge that flowed into the state from the Gold King Mine in Colorado. There was a massive state water audit and big talks about big projects with big budgets causing big changes to how we’ll get our water in Utah. 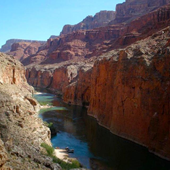 Lifeline in a Desert - The Colorado River in Three Stories

By JENNIFER PEMBERTON • DEC 18, 2015 • Listen Time 46:86
The Colorado River flows for over 1400 miles through four U.S. states, though it drains seven. It’s sometimes called the American Nile because nearly every drop of it is used by the civilization of the American West. Over 90% of the river is diverted and consumed by nearly 40 million people - not all of whom live in its watershed. It’s a lifeline in a desert - something to fight over. But when it gets squeezed through the tight canyons it has carved for itself it creates dramatic places for adventure. And it sure is pretty. 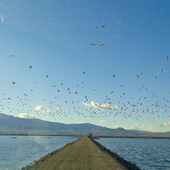 Giving Thanks on Brown Friday

By JENNIFER PEMBERTON • NOV 27, 2015 • Listen Time 48:11
A couple years ago I was home for Thanksgiving. Among the litany of things my family said they were thankful for were electricity and clean water. That’s because this particular wing of my family is employed by various utility companies. Then we started talking about who had Friday off and it turned out everyone did except the guy who worked at the wastewater treatment plant. “It’s a big day at the plant,” he said, which took everyone a little while to process. That’s when we started to call the day after Thanksgiving “Brown Friday.”. 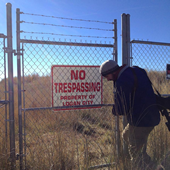 Logan's Sewage Lagoons are for the Birds

By JENNIFER PEMBERTON • NOV 17, 2015 • Listen Time 3:36
A lot of people don’t know what happens to water after it gets flushed down the toilet. In Logan, it ends up in a man-made pond, where UPR’s Jennifer Pemberton went on a bird-watching field trip for this month’s episode of The Source. 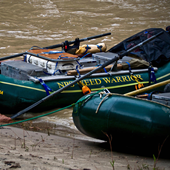 Meet the Creative Minds Behind the "STD of the Sea"

By JENNIFER PEMBERTON • OCT 30, 2015 • Listen Time 49:51
They’re smuggled in dark containers and shipped across oceans. They’re transported in pods, carried on the backs of furry animals. They’re microscopic and they travel on the wind. They’re beautiful and they’re brought in intentionally. They’re dangerous and they reproduce rapidly. They’re also delicious. 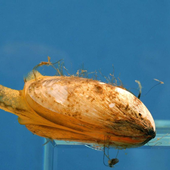 Meet the Creative Minds Behind the "STD of the Sea"

By JENNIFER PEMBERTON • OCT 27, 2015 • Listen Time 3:46
A lot of people who move to Logan, Utah, from out of state have this moment when they think a water main must have ruptured because there’s a lot of water gushing down the street. Nope. That’s just ditch water and many people have to figure out how to get water from the that ditch to their lawn or vegetable garden and there are no instructions for this. 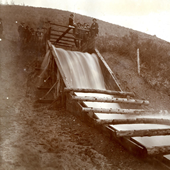 The Source: Ditch Water - The Pioneer Gift We Hope Will Keep on Giving

By JENNIFER PEMBERTON • SEP 29, 2015 • Listen Time 49:51
A lot of people who move to Logan, Utah, from out of state have this moment when they think a water main must have ruptured because there’s a lot of water gushing down the street. Nope. That’s just ditch water and many people have to figure out how to get water from the that ditch to their lawn or vegetable garden and there are no instructions for this. 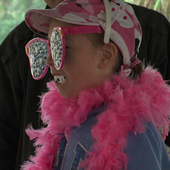 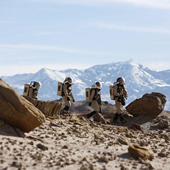 By JENNIFER PEMBERTON • AUG 28, 2015 • Listen Time 50:45
Utah has some unique water problems but they’re not that unique. Studying water in Utah can tell us a lot about similar places that also rely on high mountain snowpack for their yearly allotment. But a lot of the research involving water in Utah has implications way beyond that. 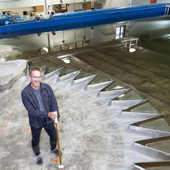 By JENNIFER PEMBERTON • AUG 18, 2015 • Listen Time 4:12
The United States had it’s heyday building dams in the 1930s and 40s, but there are still engineers designing dams right here in Utah. Jennifer Pemberton visited the Utah Water Research Lab in Logan to see models of cutting-edge dams designed to be built all over the world. 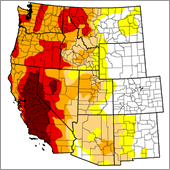 By JENNIFER PEMBERTON • JULY 31, 2015 • Listen Time 55:26
We’ve seen the image of a half empty Lake Powell and the now iconic bathtub ring around its rim. We’ve heard the stories coming out of California about wells running dry. We’ve learned a new term: sprinkler shaming. We know enough to know we’re in a drought, but what does that mean? What is drought? What should we do about it and why should we even care? 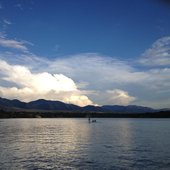 By JENNIFER PEMBERTON • JULY 21, 2015 • Listen Time 3:44
UPR has been asking listeners how drought has impacted their lives. Low water levels at some lakes and reservoirs mean Utahns might have to adjust their summer recreation plans. Jennifer Pemberton has this report on the effect of drought on Utah’s state parks. 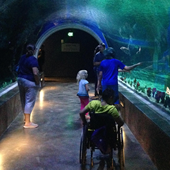 By JENNIFER PEMBERTON • JUNE 25, 2015 • Listen Time 53:24
For something so elemental, natural, essential and seemingly basic, there’s as much complexity to water as you’re willing to chase. From hydrology and fluid dynamics to understanding aquatic habitats to learning to swim or xeriscape your yard, there’s a lot to learn about water. This week on The Source we’re talking about education and water. From swiftwater rescue classes to a day at the aquarium, we’ll meet unique teachers and students who specialize in aspects of water you might not have ever thought about. 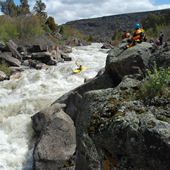 By JENNIFER PEMBERTON • MAY 28, 2015 • Listen Time 53:53
In this program, we look at how to value recreation in the hierarchy of water uses. Whether it’s skiing, boating or fishing, a lot of us recreate on the water, but do those activities trump uses like irrigation, power generation, or drinking water? We’ll look at three specific cases where recreation comes into conflict with other uses of water and some of the ways groups have resolved those conflicts. 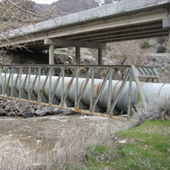 Dams Put a Damper on Whitewater Kayaking: The Case for Recreational Releases

By JENNIFER PEMBERTON • MAY 19, 2015 • Listen Time 3:41
Hydropower projects borrow water from rivers to create electricity, but while that water is impounded in reservoirs and forced into high pressure tubes, it’s temporarily unavailable for fun uses, like whitewater kayaking. Jennifer Pemberton has this story about prioritizing recreation on the Weber River. 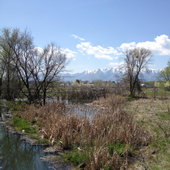 For Rivers and Streams Messiness Matters

By JENNIFER PEMBERTON • APR 24, 2015 • Listen Time 50:31
When water is left alone, it makes a mess. It backs up into wetlands. Rivers overflow their banks. Mud and silt builds up, new channels open up. But Elijah Portugal, who studies how rivers and streams shape the land, says that that mess is what rivers need to be functional. “Messiness matters,” he says. 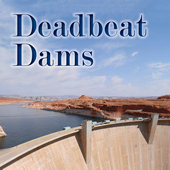 By JENNIFER PEMBERTON • APR 14, 2015 • Listen Time 3:52
The man who used to head the nation’s dam-building agency is now advocating for tearing them down. The Source’s Jennifer Pemberton talked to Dan Beard, author of Deadbeat Dams: Why We Should Abolish the U.S. Bureau of Reclamation and Tear Down Glen Canyon Dam. 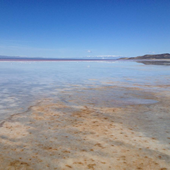 Get to Know the Great Salt Lake

By JENNIFER PEMBERTON • MAR 27, 2015 • Listen Time 49:18
It’s the fourth largest lake of its kind in the world, but the Great Salt Lake is often underappreciated in Utah. With the lake level within a foot or two of its record low, now is a good time to get to know the Great Salt Lake. In this episode of The Source, we’ll hear from researchers and resource managers as well as residents and visitors to the Great Salt Lake. We’ll learn how close we are to actually losing the lake forever and some of the threats that are challenging it well beyond its usual ups and downs. 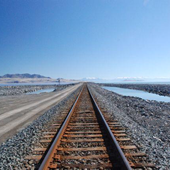 The Great Salt Lake is, right now, actually two lakes split in half by a long railroad causeway. A couple years ago the crumbling culverts that allowed flow between the north and south arms of the lake were closed for safety. Since then, scientists say, curious things are happening to the lake, especially as it approaches historic low levels. 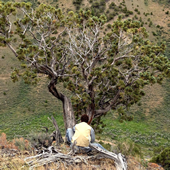 Inside every tree there’s enough information to keep researchers around the West busy for their entire careers. This episode of The Source, a look at dendroclimatology -- using tree rings to re-construct what the climate was like in Utah hundreds of years ago. Because looking at the state’s climate past is the best way to understand the future. Jennifer Pemberton talks to plant and climate scientists about how they interpret the thousands of tiny rings that make up a tree’s life history into a full picture of the cycles of wet and dry Utah has seen over the past thousand years. 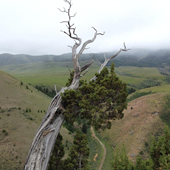 Every Tree in the West Has a Climate Secret to Tell

By taking tree ring samples from thousands of trees around the West and determining how old each tree is and how many cycles of wet and dry each has been through, researchers are trying to create the clearest picture of climate in the West over the past several centuries and in turn, hopefully, an equally clear glimpse into the future. Jennifer Pemberton joined scientist Justin DeRose on a field trip to collect tree ring samples and sends this report.ongoing research to maintain the sustainability of Utah's precious watersheds.